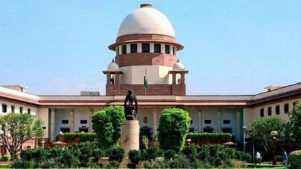 Judgement of  The Supreme Court On The Aadhaar Card

On behalf of the Supreme Court it was said that the basis for CBSE, NIT and UGC is essential. But the basis for admission to the school will not be necessary.

A fundamental difference between Aadhar card and identity

Justice AK Sikri started reading the decision on behalf of Chief Justice Deepak Mishra and Justice Khanvilkar at 11 am on the constitutionality of Aadhaar. Justice Sikri said that the base has become the identity of common man in the country. Justice Sikri said that there is a fundamental difference between Aadhar card and identity. After biometric information is stored, it remains in the system. The poor got the power and identity from the base. No alternative to duplicate Aadhar card The Aadhaar card is absolutely safe.

During the hearing, the Supreme Court has canceled section 57 of the Aadhaar Act. After this, now private companies can not demand the Aadhar card. While studying the Supreme Court’s decision on the constitutional validity of the Aadhaar, Justice Sikri has asked the Center to bring strong legislation to the earliest on the data protection. During this, Justice Sikri also said that the base is absolutely safe and the attack on it is against the Constitution.

Aadhaar card will be required for PAN

In its decision, the Supreme Court has upheld the mandatory basis for the PAN. The apex court said that the government will not share biometric data with any other agency without the permission of the court in the name of national security. At the same time, the government will also have to ensure that illegal migrants do not get Aadhaar cards. It is not necessary to link Aadhaar card with the bank.